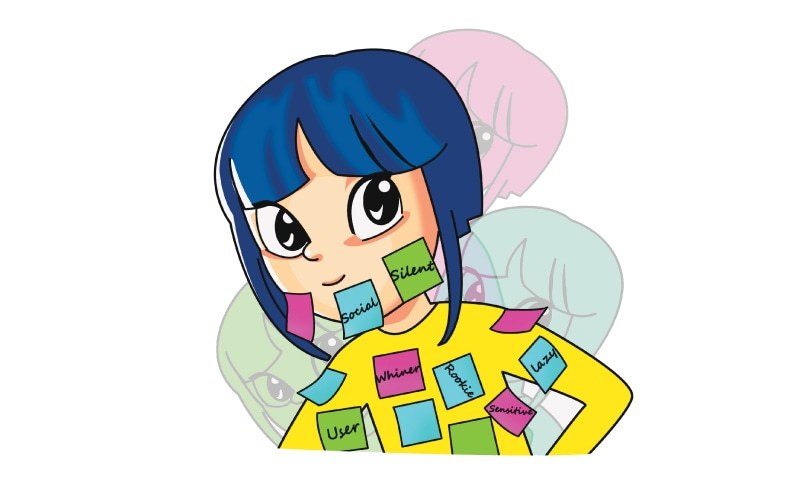 Dear friends, we often come across people whom we find different than the usual lot. They can be obnoxious for no reason, can have a bad temper, or they may find faults in others and never agree with anyone.

The kind of attitude they have makes us steer clear of them and avoid them completely. However, there may be some whom you simply cannot avoid and are forced to put up with. What should be your behaviour in this situation? Here are some suggestions to make things go smoothly, even though some people are way too irritating.

Let us call these complicated people difficult ones as they are difficult to deal with. These people can be divided into many categories, some of which are the mean, the bossy, the smug, the show-offs, etc. Then there are those whose personal grooming is not up to the mark and you feel repulsed when you have any interaction with them. The obnoxious are the extreme category and it can be hard to deal with them.

Some children think that by being mean to their peers, they are proving that they are better than them. They will try to make fun of you, pass unpleasant remarks and degrade you whenever they get an opportunity. The mean person may also be a grown-up and you have to be more careful when dealing with him/her.

Try not to get distraught by the mean person’s negative behaviour. The best policy is to ignore them. If you reply to their objectionable remarks, they will lose no time in picking up a fight with you which can grow from vocal to physical.

Have full confidence in yourself and believe firmly that this disagreeable behaviour is due to a hidden inferiority complex.

Stay polite with your mean peers and do not stoop down to their level by behaving in the same manner as theirs. Your courtesy may have a positive effect and slowly improve their behaviour and make them realise that their conduct was not proper or acceptable.

There are children who simply love to boss around, trying to impose their opinion over everyone. Whether you are in the classroom, in the playground or on an outing, they will always want to have their way.

Bossy people also have the tendency to bully their peers, pressurising them into accepting their views. In an argument, they will try to prove that their stance is correct, without listening to the facts and figures the other person is giving. They may harass you, yell at you, or threaten you of an assault.

Bossy peers should be dealt with tactfully. If you defy them openly, they may become nasty and quickly pick up a quarrel. If you tackle a bossy classmate by using a bit of diplomacy and say, “The option you are giving is not bad, but don’t you think this one is better”.

In this way, you can make them believe that the choice was theirs’ and their domineering nature will be appeased. In trickier situations you can just state that “Majority wins”. When a group of your peers vote against what the bossy one wants, he will be more likely to give in.

Life gives better opportunities to some children. They may be born in an affluent family and have more luxuries than their peers. Some of you may be more intelligent than your classmates and always attain good grades. In the same way, a few of you may be good at sports. All of us have our good and bad traits.

The smug usually have a sense of self-satisfaction which may grow into arrogance. Instead of attributing their achievements to the better opportunities they received and being grateful for them, they develop a sense of superiority and look down on their peers disdainfully. They are haughty and consider the people around them inferior.

Simply stay clear of the smug children around you. They will make an all out effort to shake your confidence, treat you with scorn and always try to ascertain their superiority on you.

The best way to tackle such peers is to work hard and try your best to prove your mettle. Your good performance and achievement will convince the smug that he/she is not the best of all, and make him realise that their attitude was totally nasty. You should firmly believe that your character, education and achievements matter more than the worldly things they keep on bragging about.

Boasting is perhaps one of the most irritating attitudes a person may have. Making tall claims about everything related to them is an unpleasant hobby of a boastful peer and he is usually disliked by everyone. Whether it is his house, his clothes, his car or his electronic gadgets, he will always claim that his belongings are the most superior of all.

Some show-offs even resort to telling lies to support their tall claims. For example, even if they went to a road side eatery on a weekend, without a blink of the eye, they will claim that they went to a five-star hotel. If they are wearing branded clothes which they got from the flea market, they will brag that an uncle or cousin sent it from abroad!

Whether they are telling you the truth or are lying, always make it clear to the show-off that you are not impressed! Give him the clear signal that you are fully content with your life, your possessions and your circumstances. It is your right to struggle for a better life, but do not allow his bragging act as a catalyst for your efforts. Follow your dreams without being impressed by the negative effects of the boast.

You should firmly believe that your character, education and achievements matter more than the worldly things the show-off keeps on bragging about.

Some children have a poor sense of hygiene and do not know the basics of self-grooming. Often they come to school without brushing their teeth or taking a shower. Their uniform may not be clean or pressed, neither their shoes polished. These children are usually shunned by their peers who feel repulsed by their foul breath or the reek of perspiration coming from them.

Tackle your hygiene-ignorant and ill-groomed peers with kindness. Instead of humiliating them in company, talk to them when you are alone. Explain to them politely that personal grooming is very important to make friends.

Maybe they live in an area where there is a shortage of water, you can advise them to brush and wash properly and use deodorants and talcum powder. Tell them that keeping their uniforms clean and crisply pressed and their shoes polished, is not an impossible task. Your compassion/tolerance can save them from embarrassment and improve their quality of life.

This topic is so comprehensive that I could go on and on. In the end, I would like to remind my young friends that no one among us is perfect! It is humanely impossible to be so. We all have our shortcomings and good traits. It is very easy to overlook our short comings but quickly pounce on our peers’ bad traits. Be careful before judging anyone or giving them a negative label.

By nature, there is also an in-born element of self-righteousness in all of us. Always be on your guard and do not let this element grow out of control, so that you become an unpopular person. Before pointing fingers at someone else, carefully look for your own flaws.

Do you have any of the above mentioned attitudes? Be honest with yourself and if you find yourself on the wrong end, try to correct your weaknesses. If you find them in your peers, try to help them with compassion and a positive mind-set. You may not realise it, but your kindness and patience may change someone’s attitude (and life) for the better.